skip to main | skip to sidebar

Dear Jack,
Shalom to you.  I am a card-carrying New Democrat active in Vancouver and a modest financial donor to the party.  We met a few years ago as you and Libby Davies were walking out of Vancouver City Hall and I was walking in.
I also am a rabbi with a Vancouver synagogue.  I lived in Israel four different years since 1971.  I am very deeply tied to that land and its people.  My son is there now and my daughter is going in less than a month for a year.   I am involved with Israel daily and know its realities well.
Unfortunately, you make a real mistake in criticizing Libby Davies for her comments about the Israeli occupation beginning in 1948.  (http://tinyurl.com/369ggcm)  You fell into a trap, Jack.  A blatantly manipulative political ploy was set up to capitalize on a volatile and emotional issue.  You played right along.
Libby said that she thinks the Israeli occupation began in 1948.  Well, it did.  I can introduce you to Palestinians living here in Vancouver who were forced out of their homes at gunpoint by Jews in 1948 and their villages destroyed.  That’s occupation.  It happened.  Denying it doesn’t change a thing.

Just look at this map on the left here of the 1947 UN partition plan.  The UN assigned the orange parts to the Jews' control and the pink parts to the Arabs.  Now, look at a 1948 map of the ceasefire lines.  The purple is what Israel held and eventually became its more-or-less acknowledged boundaries until 1967.
Even well before 1948, Jewish organizations launched a well-planned and well-executed campaign to establish “facts on the ground” by planting 57 settlements literally in the middle of the night all over the country.  This was especially true in the southern Negev desert region so that the UN would grant that area to the Jewish state-to-be.  Even though there was negligible and recently imported Jewish population amidst a far larger and very well-established Arab population (in that large orange area in the south), the UN partition granted it to the Jews and not the Arabs.  This is a source of great pride in Israel, well-known to every school child and celebrated in museums.  To know more, see "Tower and Stockade", tourist attraction and commemorative coin.

To imply that Libby doesn’t support the existence of the State of Israel is nothing but disingenuous manipulation.  You know that’s not true; Libby does support the existence of the State of Israel.  It is Israel’s behaviour that Libby condemns – and rightfully so.
I am surprised and deeply disappointed that you didn’t defend Libby, certainly one of the NDP’s most courageous, clear-thinking and popular MP’s.  You should have turned the criticism back on Bob Rae and Thomas Mulcair for suggesting that, because Libby spoke the truth about 1948, her support for Israel’s right to exist is suspect.  That is a ridiculous accusation.  One thing has nothing to do with the other.  I don’t understand why you succumbed to such simplistic trickery and didn’t have the guts to say what was really going on.
As an active member of the NDP, I would appreciate hearing your reasons for going along with this attack on Libby and this intentional distortion of very significant historical facts regarding Israel and Palestine.  If you honestly didn’t know better, I can excuse it.  You can’t know everything about every issue.  (But you certainly need to check with someone who does.)  On the other hand, if you felt you simply had to bow to political pressure, you and the NDP have lost some of the respect I always have had for you.  I would appreciate a reply.
Thank you so very much,
David
Posted by Rabbi David Mivasair at 4:00 PM No comments:

On Monday morning, May 31, the Ahavat Olam Synagogue board decided unanimously to join a demonstration in downtown Vancouver protesting the Israeli attack on the unarmed Gaza humanitarian aid flotilla the previous night. 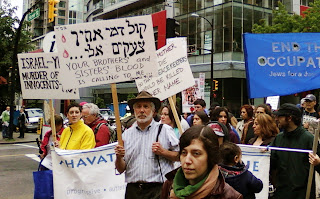 Five of us came at noon with the Ahavat Olam banner and three placards. Several other members were present on their own or with a different group, Jews for a Just Peace. In the crowd of ~100, I guess about 20% were Jews.
Sharing my experience and reflections is difficult, painful and only very cautiously hopeful. We must each search for understanding and wisdom in our own personal responses. I invite you to share thoughtfully as well, either to me privately or on the Ahavat Olam discussion list at AOdiscussion@yahoogroups.com.
Why go? – News of the attack reached me by e-mail Sunday before midnight. I watched Israeli TV news and analysis for hours as the story unfolded. I was clear that the Israeli commandos had over-reacted with deadly violence against people who were trying to defend themselves with nothing but found objects – yes, iron pipes, kitchen knives, perhaps even firefighting axes. True, they did not remain non-violent. I wish they had. But there was no reason to kill (as was reported at the time by Israeli government spokespeople) 15+ unarmed activists. All of which is a microcosm of the bigger issue: the years-long siege of Gaza that traps 1.5 million people in a huge open air prison with inadequate food, medicine and other necessities and the continued theft of land and oppression in the West Bank where another 2 million live.
Torah teaches that God demands we “do not stand idly by the blood of your neighbour” (Lev. 19:16 לֹא תַעֲמֹד עַל דַּם רֵעֶךָ). Further, our sages in the Talmud taught that if we are able to prevent our community from sinning and we do not do so, we bear the guilt even if we do not commit the sin ourselves. As religious Jews we are obliged to speak out against Israel’s actions in this case.
What we did – As soon as we arrived, we were welcomed by others and approached by reporters. Many were surprised to see a synagogue join in. Some even misunderstood our purpose and assumed that we were there to oppose them and support the Israeli action. That is not an unreasonable expectation considering the response of the most of the organized Jewish community. Far more, though, we were thanked for being there. Reports of our presence were carried by CKWX, the Canadian Press, the Georgia Straight (http://tinyurl.com/3alx92b) and possibly elsewhere.
One of our signs read; “Israel – YES!; Murder of Innocents – NO!”. Another quoted Genesis 4:10 as God spoke to Cain after he killed Abel, “The blood of your brother(s and sisters) is calling to me . . . “. The third, made by a member whose grandmother was murdered by Nazis in Poland and whose Holocaust survivor father was there with us, said, “My grandmother did not die so that peacekeepers would be killed in her name.”
At one point, I put on my tallit and sounded the shofar as a wordless cry to wake up the conscience of our Jewish community. Many in the crowd understood that cry very well and thanked us.
No hint of antisemitism, no blanket condemnation of Israel – I was most surprised by the tone and the content of the demonstration. People were very angry and upset. Many were Palestinians, some with family in Gaza. And yet, there was no sign, no speech, no expression of any antisemitism or condemnation of Jews or even of the State of Israel as a whole. Absolutely none. There were repeated chants of “Free Palestine”, “End the Siege of Gaza” and “Shame on Israel” – but never once did I hear anything like, God forbid, “Death to Israel”, “Destroy Israel”, “Down with the Zionist Entity” or any of the many expressions of hate against Israel and Jews that I can easily imagine could have easily been said. There were no signs with a Jewish star equalling a swastika. Nothing like that at all. And, no one at all was controlling the signs or what speakers said. That was quite different from what I expected. I was impressed.
Brief reflection – I believe we did the right thing. I am grateful that a synagogue representing a segment of the Jewish religious community spoke up and was there.
Israel’s actions this week, sadly, will drive an even greater wedge between it and the nations of the world. Even sadder, it will drive many Jews to further dissociate themselves from Israel and from Judaism and even from their own Jewishness.
Along with many Israelis, I hope and pray that, sooner rather than later, more and more Israelis will begin to look at what their country is becoming and commit to finding a better way.
-- David
A few links for further understanding:
• An American-Israeli for 50 years re-evaluates her country:
• Real goal of the flotilla was break the siege, not deliver aid
• Aid delivered to Ashdod not likely to reach Gaza -- Amira Hass in Haaretz
Photo courtesy of Lawrence Boxall ©
Posted by Rabbi David Mivasair at 2:40 PM No comments: